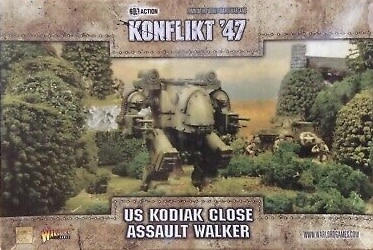 As the US developed walker tactics for regiments of Grizzly and Bruin walkers it became apparent that an antiaircraft capability was required; wheeled and tracked systems were unable to coordinate with the walkers in urban or close terrain.

The Kodiak was the result, reducing its weight with the removal of the 75mm gun, the Kodiak is more agile and able to deliver a storm of heavy calibre rounds when defending against aircraft. In addition, it is a popular walker with troops in close quarters, its weaponry capable of decimating enemy infantry if they are foolish enough to give it a target.

The Kodiak is perfect for the front line as it is able to dish out an insane amount of bullets, easily taking out entire squads and lighting up lightly armoured vehicles. It can also be situated in an elevated position providing a considerable amount of supporting fire, and it'll usually become the main threat on any battlefield.

Miniatures are supplied unpainted. Preparation and assembly may be required.