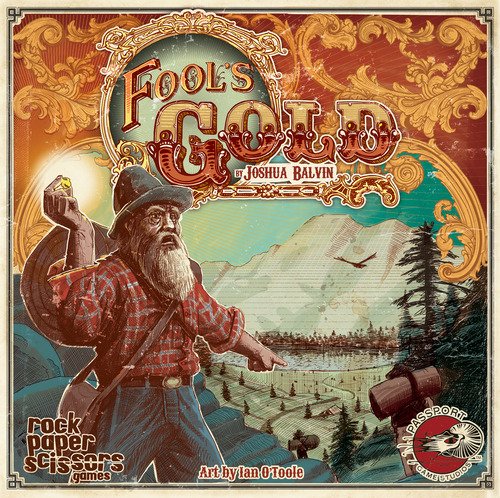 Over the course of the next seven years, this discovery would redefine the landscape of what is now the West Coast of the United States. Rumors of the discovery spread rapidly and by 1849 as many as 90,000 forty-niners arrived from all over the world. Boomtowns exploded across the landscape. By 1855 more than 300,000 Argonauts had flooded into the California region in the hopes of striking it rich! While some made a fast fortune, most (especially those who arrived after 1850) garnered little or lost much.

In "Fool's Gold", players act as wealthy investors sending prospectors into the diverse regions of the landscape in a fast-paced quest to snatch up gold before others beat them to it. In the early rounds of the game, gold is easy to be found.

As the game progresses, resource depletion sets in and players must resort to more desperate attempts at snatching what little can still be found.

The player who is most savvy at balancing finances, location and timing might just make a fortune