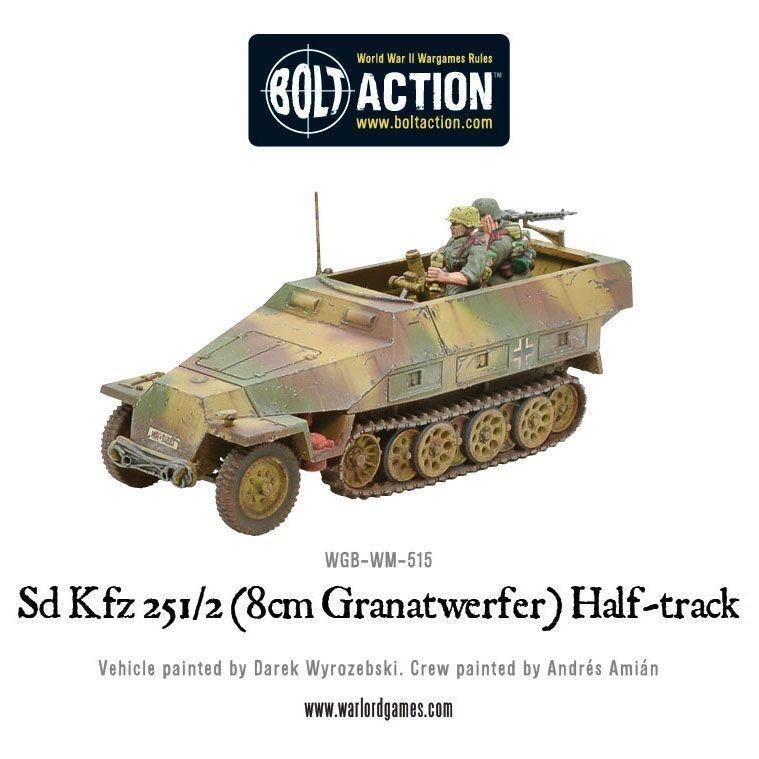 From the early stages of World War II, the German army began to equip their Panzergrenadiers with armoured half-tracks that would support their panzers in action. They developed the excellent Sd.Kfz 251 series, made by Hanomag, and steadily produced them in their thousands, with over twenty versions seeing service in most theatres of the war.

One of the most useful variants was the 8cm Granatwerfer – a version of the Hanomag carrying the standard infantry mortar. The mortar could be moved around the battlefield quickly and in reasonable safety, its armour shrugging off most infantry weapons and shrapnel. The mortar was most commonly removed from the half-track to engage the enemy, however, in extremis, it could fire from the safety of the vehicle.

A full load of 66 rounds of 81mm mortar rounds were carried, with more shells available from supply trucks or towed trailers.

This model represents the 251/2 Ausf D version of the vehicle (it had a simplified armour shape from the earlier Ausf C, particularly obvious was the sloped rear Armour) that was in use from 1943 onwards in most theatres. This variant featured a forward-facing 81mm mortar in the rear, tactically spot on for attacking and moving position frequently.

This product is supplied in a green reinforcement box