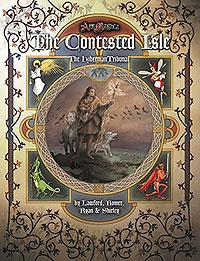 The magi of Hibernia respect the land and its supernatural inhabitants, granting much of the Tribunal`s area to hedge traditions and allowing supernatural creatures a vote at Tribunal. Now, magi from elsewhere in the Order have come to "reform" the Peripheral Code, laying siege to and taking one of the Irish covenants. As English lords push further into the island, and the Church struggles with attempts to make it fit continental ideals, the Order of Hermes faces its own conflict. It is, as ever in Ireland, a time for heroes. The Contested Isle - The Hibernian Tribunal is an Ars Magica 5th Edition sourcebook.