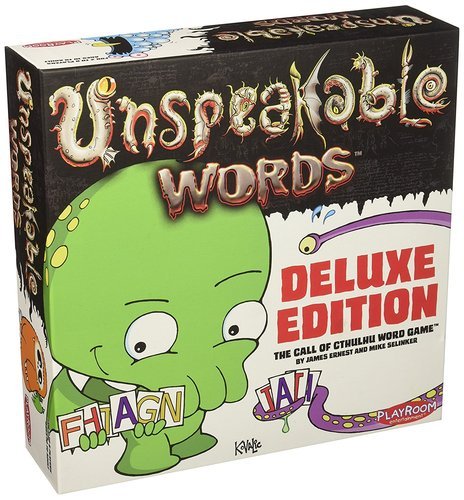 Unspeakable Words is the Call of Cthulhu Word Game designed by James Ernest and Mike Selinker. In the game, you and your opponents will attempt to form words from the letter cards in your hand. Each letter is worth points – the amount of points is determined by the number of angles in the letter (where the hounds of Tindalos are lurking!). You may try to make the highest scoring word possible, but… you’ll have to test the strength of the word against a roll of the 20-sided die. Roll equal to or higher than the value of your word and you’re safe… but roll less than the value of your word and you lose a precious piece of your sanity, represented by an adorable Cthulhu pawn!

Each letter is uniquely illustrated with a horrifying character from the works of H.P. Lovecraft, which adds to the dark whimsy of the game.

Since its release in 2007, Unspeakable Words has been received with great reviews. It was Games Magazine's Word Game of the Year and the Best Party Board Game at BoardGameGeek's Golden Geek Awards. In 2008, a second edition of Unspeakable Words was released, this time with purple pawns. Because of the flexibility of the game, a second deck and second set of pawns can be added for twice as many players.

Since the inception of Unspeakable Words, Playroom Entertainment has wanted to release more specialized editions. With this Kickstarter, supporters can upgrade the Unspeakable Words game with special multi-colored pawns (five pawns each of eight colors to play up to eight players!), a dice/pawn bag and additional cards! AND...this Deluxe Edition will feature artwork by famed artist John Kovalic! Plus, if we hit our stretch goals, even more amazing things will be added to the game!