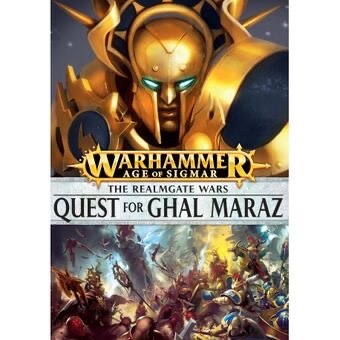 Ghal Maraz, the sacred hammer of Sigmar, has been found. Twelve Stormhosts, numbering thousands of lightning-touched warriors, have been sent to reclaim it from the servants of Tzeentch in the Hanging Valleys of Anvrok. Meanwhile, in the foetid reaches of Rotwater Blight, the search for Alarielle’s Hidden Vale continues. Can the Stormcast Eternals forge an alliance with the sylvaneth before Nurgle’s foul magic consumes the Jade Kingdoms entirely?

Enter the desperate and brutal war for the Mortal Realms with the following:

- In-depth tales of the Stormcast Eternals' desperate heroism as they battle the forces of Tzeentch to reclaim Sigmar’s Hammer in the Realm of Metal, and ally with the mysterious sylvaneth to lift Nurgle’s Blight from the Realm of Life.
- Eight battleplans that let you refight these epic conflicts.
- 28 Warscrolls and 8 Warscroll Battalions with rules for Citadel Miniatures from the Stormcast Eternals, Khorne Bloodbound, Nurgle Rotbringers and Skaven Clan Pestilens ranges. Time of War rules for fighting battles in the Realms of Metal and Life.
- Step-by-step painting guides for Stormcast Eternals of the Celestial Vindicators and Hallowed Knights Stormhosts, Putrid Blightkings from the Grand Congregation and Chaos Warriors of the Bleak Horde.