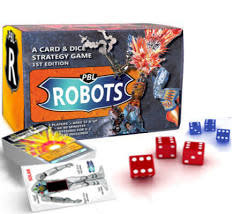 Pro Bionics League Robots (PBL ROBOTS) is a card & dice rolling game for two players (variant rules for multiplayer, expansions to support multi-player and other game variations are also in the works) who draft and build decks to build up (upgrade) a super powered robot while blasting apart their opponent's robot. Once you blow off all 4 limbs (head, left arm, right arm, legs) of the opposing robot, you win the game. A unique stacking mechanic makes building your robot visually appealing and functions as an important part of the gameplay. Attacks and defenses are determined by die rolls. Years of playtesting with multiple teams across the country (Maine, Minnesota, Wisconsin and North Dakota) has developed the game into a highly competitive format that is appealing for hardcore gamers and still very fun for the casual gamer. Rule variations support new players and tournament rules for more hardcore players.