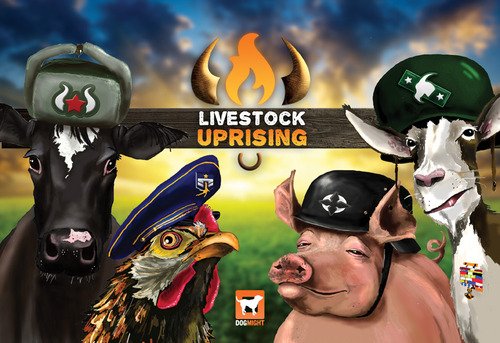 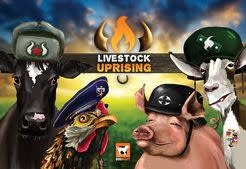 Livestock Uprising is a tactical resource management game in which you harvest farmland, marshal animal armies, and battle for control of the farm. Each player takes control of one of the four animal factions: pigs, goats, cows, or chickens. Each faction has its own barn and special attributes that impact gameplay.

Each faction has three Generals that move around the farm harvesting crops and marshaling troops. Initially, the Generals can harvest only the least valuable resource: grass. Players must spend their resources in order to marshal new troops, which unlock the ability to harvest better resources, e.g., a donkey allows its General to harvest corn. Players work their way toward harvesting the most scarce resources so they can marshal the most powerful troops. Each General can command only five Troops, so players often specialize the Generals based on their location, nearby threats, and distance from their barn.

The farm is an 8x8 randomly tiled board containing crops, obstacles, and empty fields. When setting up the board, a small 4x4 grid is laid out randomly, and each player positions his barn anywhere along the perimeter of the grid. The rest of tiles are then randomly laid down to form the final 8x8 board. When choosing a starting location, players must consider the available resources, distance to neighbors, and the faction's special abilities.

In addition to the common Troops, each faction may also marshal Special Forces. Each Special Force Troop gives the faction a distinct advantage: chickens gain a movement bonus, cows gain a defensive bonus, pigs gain a harvesting bonus, and goats gain an attacking bonus. Players also have three hidden Command Cards that they may play at any time to gain an advantage or get out of a tough situation. The Command Cards range in effects and are very valuable when used appropriately.

The goal of the game is to destroy the other factions and take control of the farm. Players achieve this by forming a Super Army and triggering the end game. At any time a player may choose to form a Super Army if all of their General are in their barn. The Super Army combines all of the player’s Troops together under a single General. This massive army gets an attack, defense, and movement bonus, but cannot harvest resources or marshal Troops. Forming a Super Army triggers the end game as the only effective strategy against a Super Army is to form one of your own. The Super Armies then drop the gloves and battle it out for all or nothing victory.