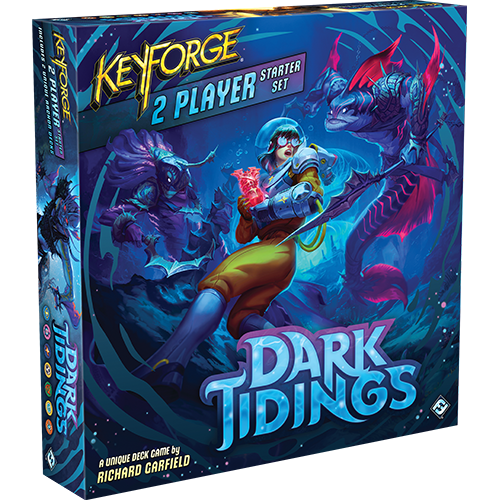 Dive beneath the waves of the Crucible’s oceans with Dark Tidings, the fifth set of Archon Decks for KeyForge, the world’s only Unique Deck Game! Dark Tidings introduces a brand-new House to the game: the Unfathomable. Replacing Dis in the current cardpool, the Unfathomable specialize in controlling their opponents by exhausting enemy creatures. What’s more, every House gains the power to call upon the tides of the Crucible, gaining advantages from high tide and avoiding the punishments of low tide. Finally, Dark Tidings also brings the possibility of evil twin decks into the game! Any evil twin deck is an exact copy of another deck in existence, except with many of its cards exchanged for their “evil twin” versions, featuring alternate abilities, graphic design, and art.

Each Dark Tidings Two-Player Starter Set contains two ready-to-play 36-card decks, bringing together three of the diverse Houses of the Crucible—each featuring their own mix of cards and unique from every other Archon Deck in existence. You’ll also find all of the tokens that you need for two players to start playing KeyForge! 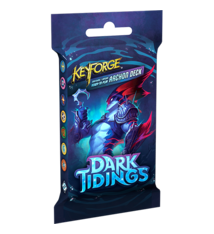