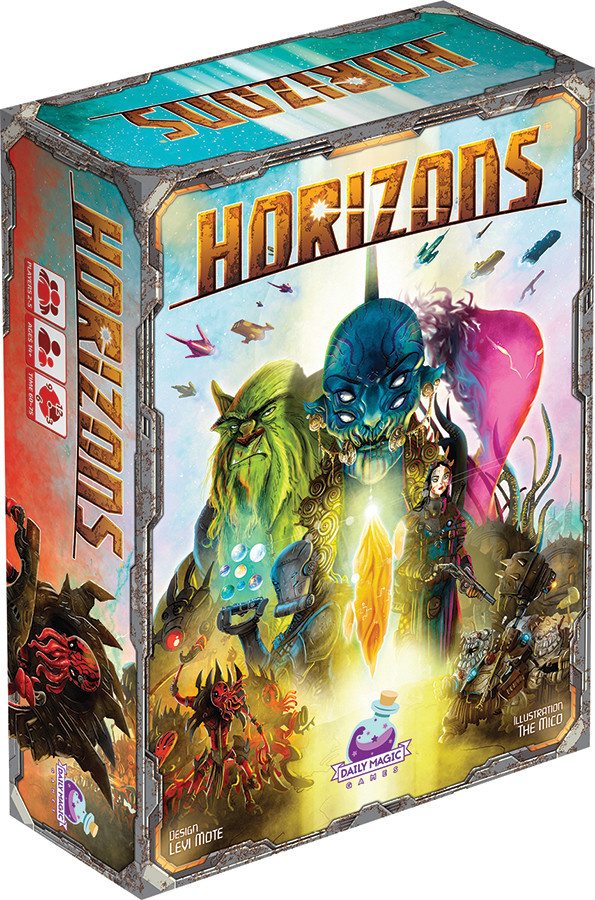 In Horizons, you are a star faring species taking the first steps into a new star cluster. Explore new worlds to grow your knowledge and Adapt to living in the varied habitats you discover. Expand your presence in the cluster with new colonies and Exploit the metal and energy resources you find. Ally yourself with assorted interstellar species and Acquire covert missions to increase your influence. Do all of this and you could become the dominant species in this cluster and to begin your reach into the galaxy.

We love the scope and majesty of 4X games but don't look forward to hours, or even days, that it can take to play the best of the genre and we weren't wild about all the extermination. Game designer Levi Mote set out to create a friendly 4X experience in an hour-long game and, after years of development and play testing, Horizons has proven itself to be just that game – a Euro-friendly, decision-driven, 4X-style game that 2 to 5 players can enjoy in about an hour.

Horizons has multiple paths to victory. Will you explore and ally your way to knowledge-win, or expand and exploit the worlds for a build-win? Perhaps allies and covert missions will bring you a missions-win, or you'll balance all three paths to create a well-rounded dominion. The choice is yours and the stars await.