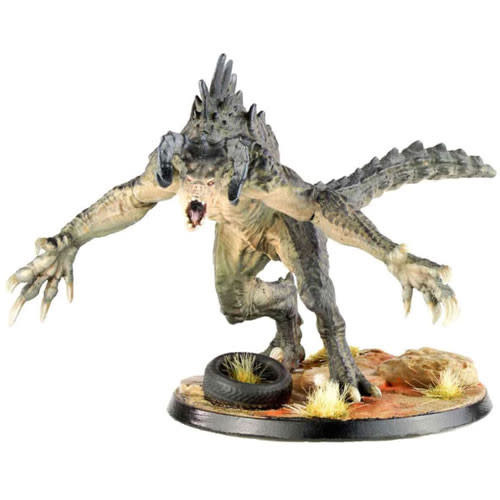 There is no more terrifying sound in the wasteland than the roar of a Deathclaw. When heard far off, wanderers would do well to head swiftly in the opposite direction. When heard close by, the only options are hide, flee or fight. Chances are it won’t matter what you choose – the outcome will be the same.

These monstrous lizards stalk the wastelands, hunting far and wide for prey. Originally created by government experiment as a weapon in the Great War, Deathclaws were designed to have razor sharp claws and thick hides – a perfect, agile and speedy death machine that lopes relentlessly towards the kill. Only the foolish, insane or heroically brave would stand toe-to-razor-sharp-claw with one and expect to win.

All deathclaws exhibit a devilish cunning on the attack and a shrewd understanding of when to leap and when to stalk their enemy. However some have further intelligence, understanding grunts or gestures in combination with actions, such as saving a brood of eggs safeguarded or attacking a foe to defend a group. But it is the foolhardy wastelander that takes such interaction for granted, or expects it from all examples of the species. A deathclaw gauntlet might be a tempting prize, but there are few who can live long enough to claim it.