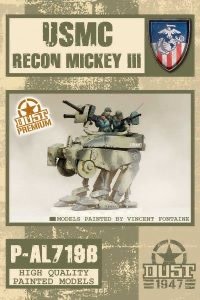 As the war rages on all fronts the Allies feel the need to have more efficient recon troops: scouts that can get to the enemy before the main assault. These highly trained soldiers needed a new vehicle to do their job safely, and they were rewarded with the Medium Combat Walker Recon Mickey III. This lightly armed walker should not be treated lightly! As its turret was removed, it gained tremendous speed while still mounting a few machine guns for close ground and air defense and a powerful recoiless rifle to deal with any heavier target. The highly trained crew of a Recon Mickey III is very capable of calling in an airstrike or an artillery strike on enemy positions, making it invaluable to any Allied army. The walker is presented here in desert pattern, as used in North Africa and the Middle-East circa 1947.