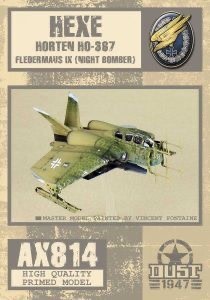 The Luftwaffe has of course access to the latest generation of jet powered aircraft. Many are even fielded before the trials are over: if there's an operational need, then the plane goes on mission! The Hexe is such an aircraft, equipped with some of the latest systems available. Its nose radar makes the plane very accurate, especially coupled with the underbelly gliding bomb. It allows to attack large targets from a safe distance, a new nightmare for the enemies of the Axis.

This miniature comes with its own Dust 1947 unit card. Like all regular Dust 1947 miniatures, it comes already assembled and primed.