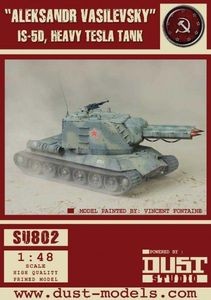 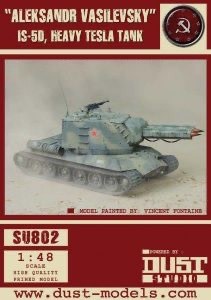 For hundreds of millions of citizens of the Sino-Soviet Union, Iosef Stalin is the Supreme Leader, whose wisdom will guide them to victory. For the enemies of the SSU, the name means death. Many of the SSU’s early heavy tanks were named after Kliment Voroshilov, the Defense Commissar. When it was time for a new and improved series, who better to name it after than the Supreme Leader himself?
The “Aleksandr” is the latest version of the IS-5, mounting two impressive Tesla Guns that fire on the same target. The result is devastating again any type of target but particularly against armor. The vehicle is presented here in its Babylon pattern camouflage, as observed around Mesopotamia circa 1947.