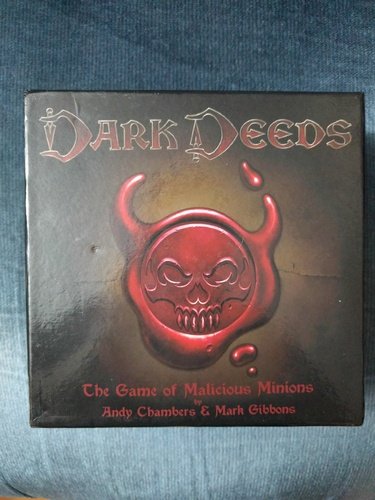 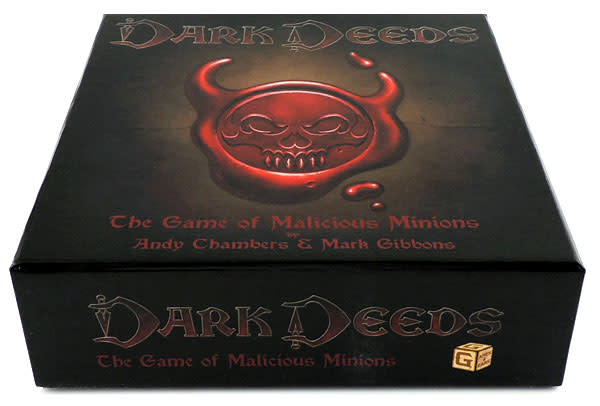 Dark Deeds is a darkly humorous card game of skullduggery and suspicion for 2 to 5 players. In Dark Deedsplayers take the role of minions in service to a powerful, mysterious, and clearly villainous, patron. The Patron wants deeds of infamy, violence and coercion committed and you are the ones who must avoid the authorities, the do-gooders and, most of all, each other to perform them. Rich rewards beckon, along with horrific punishments for failure. So are you the kind of malevolent minion the patron needs?

There’s a ‘street’ deck for the minion’s prospective targets – clerics, artisans, and merchants and their protective guards from the city watch. Then there’s a ‘tavern’ deck with potentially useful loot and plot cards to help the minions get the job done. The implacable hand of evil is revealed by the nemesis cards in the street deck – princes, politicians, and do-gooders the player’s evil patron wants eliminated. The tavern deck includes ‘Dark Deeds’, specific missions to take out particular nemeses (that’s the plural of nemesis in case you’re wondering). Picking up a Dark Deed is a very mixed blessing. A rich reward is earned for completing it, but it can’t be discarded and the patron will exact a heavy price for any incomplete Dark Deeds held at the end of the game.

The masterful touch is how the street deck is laid out to create a constantly moving scene of different characters. Each turn the street moves along, the card closest to the end leaves and everyone else shuffles up with empty spaces filled from the deck. Minions enter from one end of the street and have to get past any intervening guards to reach their targets.