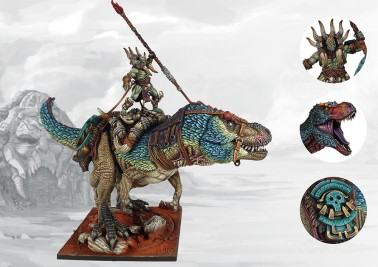 When the Abhoreth Spire fell to the Dweghom advance, it was not only the W’adrhun who were released, millenia upon millennia of predatory and dangerous creatures, dormant fodder for the twisted Spire experiments, were released as well. Of all those countless creatures, none has thrived like the Apex Predator. This monstrous beast has been harnessed by the W’adrhun as a living engine of destruction, lending its primal savagery to that of the W’adrhun forces. The kit also includes a rider, an alt sculpt of the Predator character.