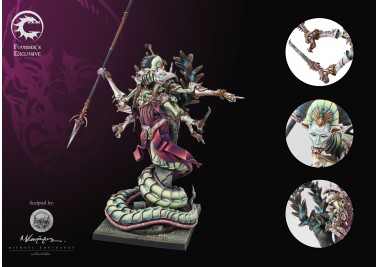 Sculpted by Michael Kontraros, our Spire Founder’s Exclusive - The Legacies of the Ark - depicts a Lineage Highborn Elder in all his twisted glory. His Avatar projection, already a masterpiece of biomantic expertise, has been enhanced by it’s rider with proprietary knowledge available only to his Lineage, resulting in an inhumanly efficient killing machine that mirrors the twisted psyche of it’s owner.

This Founder's Exclusive depicts an Lineage Highborn, his complex and ornate Avatara Projection clearly signaling his Elder Status. This model can thus be fielded as a Lineage Highborn, and is especially appropriate to represent an Elder of his lineage gifted with the Legacies of the Ark Supremacy Ability.