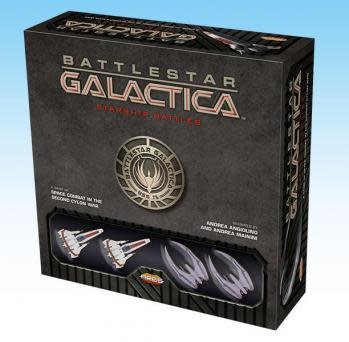 After 4,571 days, the Cylon War ended with a sudden armistice. Peace lasted 40 years. But now the Cylons are back, as fierce and combative as ever. They want to exterminate what remains of Mankind. And they have a plan. The Twelve Colonies are wasted and in ruins. But the Colonial Fleet is there, to face Cylon spaceships and protect what it is left of Mankind.

In Battlestar Galactica - Starship Battles, players take control of Colonial and Cylon spaceships and face each other in furious dog fights and daring missions. The innovative game system features easy to learn rules, a unique set of maneuver cards for each spaceship, and two exclusive devices - the control panel and the rotating miniature base. You will be able to relive on your tabletop the exciting combat sequences from the TV series, just a few minutes after opening the box!